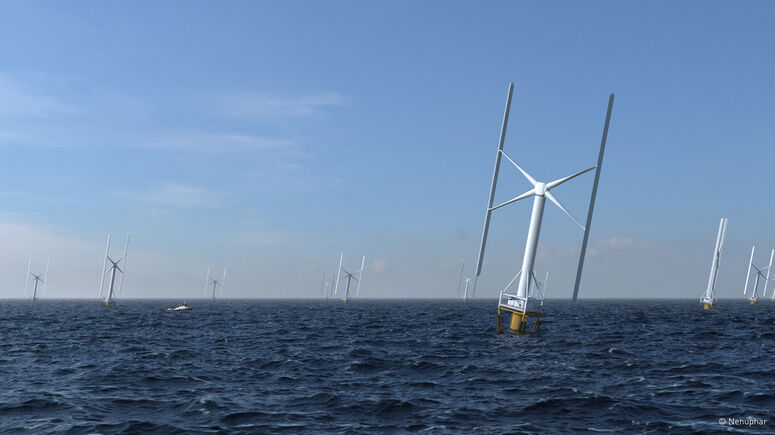 PyVIV Project consists of a non-rotating hydro-turbine based on the VIV phenomenon ideal for medium and low current areas (<2m/s).

The most common way of extracting energy from a geophysical flow, such as wind or marine currents is to convert it into a rotating motion by a dedicated structure such as a wind turbine or a hydro-turbine. Although technically mature, these processes pose problems in terms of aging and reliability. In particular, the technical and economic relevance of this type of solution in medium to low current areas (<2m/s) is not established, thus motivating new research on alternative technologies.

Among these new processes, the category based on the recovery of the vibrations energy induced by a flow on a structure appears to be particularly promising and is the subject of numerous works. It consists of submerged mechanical structures vibrating under the effect of marine currents. This effect, well known to hydrodynamicists, is called energy recovery by vortex induced vibrations (VIV).

Our solution is in the form of a grid of cylinders placed at the bottom of a river or an ocean. The presence of a marine current will cause vibrations of the structure. The energy of these vibrations will be extracted. The recovered energy can then be supplied to the network by a cable.

This project aims to significantly reduce the OPEX of inspection, maintenance and repair operations (IMR) under the sea and make them achievable in conditions of strong currents while remaining consistent with the recommendations of the IMCA. The solution is based on the coupling of a surface support vessel equipped with a specifically adapted LARS (Launch & Recovery System) and an autonomous, manned submarine vehicle certified for underwater missions of several hours in areas of strong current up to 200m deep. Its payload depends on the purpose of the missions: saturation divers, scientists and experts, ROV, etc. The prospects for economic exploitation are backed by offshore markets in general and MRE markets in particular.

The Wave-Bumper company is developing a system of movable dikes to protect coastal areas from ocean hazards. Its protective anti-submersion devices are resistant to the destructive impact of storm waves. The Wave-Bumper mobile modules are rapidly deployable on site, and have no negative effect on the local environment. In order to use this coastal airbag in the right place and at the right time, Wave-Bumper is developing an alert interface which combines advance hydrodynamic data as well as the geomorphological factors of the area in vigilance. This calculation offers real-time targeted prevention in terms of the optimum dimensions and positioning of the Wave Bumper defence modules on site.

In recent years, we have witnessed the rise of aerial drones. This growth is accompanied by a strong development of autonomous embedded systems. They are constantly becoming safer and more versatile, providing machines with even more innovative and varied capabilities. Therefore, it is logical to see this type of systems applied to operations at sea, by nature hostile to man. With this in mind, the idea is to use these "drones" systems (semi-autonomous or autonomous) to cover certain tasks / interventions for Marine Renewable Energies (MRE). These will include site characterization, inspection, investigation or decision support missions before deploying heavy means, or on-site monitoring missions. Thanks to its low cost, availability and ease of use, this type of system will enable the various players in the MRE industry to have innovative, versatile, adapted and adaptable tools that can cover a wide range of missions and thus streamline onsite costs. This will also avoid exposing personnel to the risks of offshore missions.

The AQUA project is based on a hybrid system based on the cooperation between a remotely operated submarine (ROV) and an automated surface vector (USV) as a projection base:

-        A catamaran surface vector of 1.80 meters in length, equipped with innovative electric, capable of evolving autonomously (autopilot) with connection to a ground station and a communication link.

-        A tele-operated robot with conventional electric propulsion capable of diving up to 150 meters connected to an umbilical cable of 50 meters and deploy from the USV.

The tests of this prototype will allow the project to carry out a typical inspection mission on a test site at sea with an automatic navigation of the surface vector and a visual inspection mission by means of the ROV. This mission will be conducted by a remote operator from a boat or land.

Renewable sources of energy in the global power mix are more and more important since the world electricity demand grows at an annual rate of 2.4%. Humans have been capturing the energy of moving water for thousands of years. Hydropower is a mature and cost-competitive renewable energy source, but all existing technologies of hydropower need to build dams or weirs that disturb the natural environment. To solve the issue of river ecological continuity, it is important to launch new hydropower technologies without the need of a dam or a weir. It means to harness energy from the natural low speed of river flow, which is not artificially accelerated by dam or a weir. The maximum mechanical power output from a turbine used in a run-of-river application is equal to the kinetic energy of the water impinging on the blades, decreased depending on the turbine efficiency (<50%). The harnessed mechanical power output of the turbine is subsequently reduced according to the generator efficiency. To improve the electrical power output of hydrokinetic non-dam water turbines and consequently to allow a breakthrough of this new technology, it is necessary to develop and industrially manufacture a new waterproof, low cost and robust generator for very low speed since there is not such a generator on the market. To achieve this EDIE SARL (one of the rare companies developing, under the trademark EcoCinetic, hydrokinetic picoturbines, benefits from many years of experience in this domain, including a 6 years’ experience of prototypes operating in natural sites, giving the company a unique know how in regard of what to achieve and how to do it), and BAC SAS (an expert in windings, mainly operating in Aeronautic and Railway industries, looking for new applications for its know how, in particular within the market of renewable energies) developed a new generator prototype through the NEREIDE project. The next step, called NEREIDE 2, will consist of integrating the new generator developed in NEREIDE project in a full system including turbine, bearings, structure, floater & generator, then to manufacture a prototype of the hydrokinetic picoturbine to be tested in natural environment.

Latest news about the project

Get more information about the supported innovative projects